Along with at least 50 percent of the Australian population, I’ve now had the COVID-19 experience. Catching it wasn’t deliberate though, with so many having passed through that particular ‘infection and recovery’ portal, I was feeling a bit underinformed as I wrote about COVID in the absence of firsthand acquaintance! Being in our 80s, we’d been tremendously careful, had our four vaccinations - two AstraZeneca, one Pfizer and one Moderna - and continued to wear N95 masks in crowded locations. But there’s always a finite risk and my luck ran out.

The first symptoms were sneezing and a nose running like a drain – I misinterpreted that as allergies – then waking up with a cough at 2 AM. Checking any suspicious symptoms with a RAT test had, as the case for so many of us, become a way of life. I was accustomed to seeing the “C” (control) line come up fast and bright red and the “T” remaining completely clear, but this time the ‘T’ lit up like a traffic light! There was no doubt concerning the diagnosis. Fortunately, we have a guest room and bathroom where I could isolate and only one of us became infected. As we are all aware, many have had to face this in much more difficult circumstances.

The first step was to go online and (as a Melbourne resident) report my positive RAT and relevant (to care and treatment) personal information to the Victorian Health Authorities. Especially for someone who is older or someone who has underlying health conditions (comorbidities) that could make COVID worse, it is very important to do this immediately, for three reasons. If you are over 70 and/or in that ‘other co-morbidities’ category, you should be eligible for treatment with one or other of the antiviral drugs (Paxlovid and Lagevrio) that are available under the Pharmaceutical Benefits Scheme (PBS). The second is that these antivirals (both of which are taken orally as pills) are optimally given early, over the first five days after becoming symptomatic. The third is that, especially if you are in one of the known vulnerable categories, you will receive a call from a health nurse (once registered, everyone has a case number) who will offer immediate and ongoing support.

The next step is to notify your doctor that you are COVID positive. I’d already checked out that line of communication, and it’s worth knowing how your medical practice has this organised. The antivirals require a doctor’s prescription and, particularly in the case of Paxlovid, medical review is essential to ensure that the treatment will not put you at risk, either from some contra-indicated drug interaction or underlying clinical condition, like kidney disease. You could check that out ahead of time with your GP. The back-up for securing drug treatment is via the online notification mechanism that’s there to ensure you get the appropriate medical help.

So far as possible drug interactions are concerned, the less complicated treatment is Lagevrio (also called Molnupiravir) which, developed as an influenza treatment by Ridgeback Biotherapeutics and marketed by Merck, delivers a nucleoside analogue that introduces lethal errors into the replicating SARS-CoV-2 genome. Being a mutagen, it cannot be used in pregnant women or nursing mothers. Results to date indicate that Molnupiravir given early helps to prevent mild to moderate cases progressing to severe disease.

The Paxlovid (developed and marketed by Pfizer) story is more complicated because it is two different drugs, both protease inhibitors. The treatment pack contains ten doses, two tablets of Nirmatrelvir and one of Ritonavir. Nirmatrelvir is active against the CoV MPRO, a viral protease that plays an essential role in SARS-CoV-2 replication by cleaving viral polyproteins. The job of Ritonavir, which is also used to treat HIV/AIDS patients, is to inhibit the metabolising enzyme cytochrome P450 3A (CYP3A4) that normally breaks down protease inhibitors (like Nirmatrelvir) and thus prolongs their bioavailability in blood. 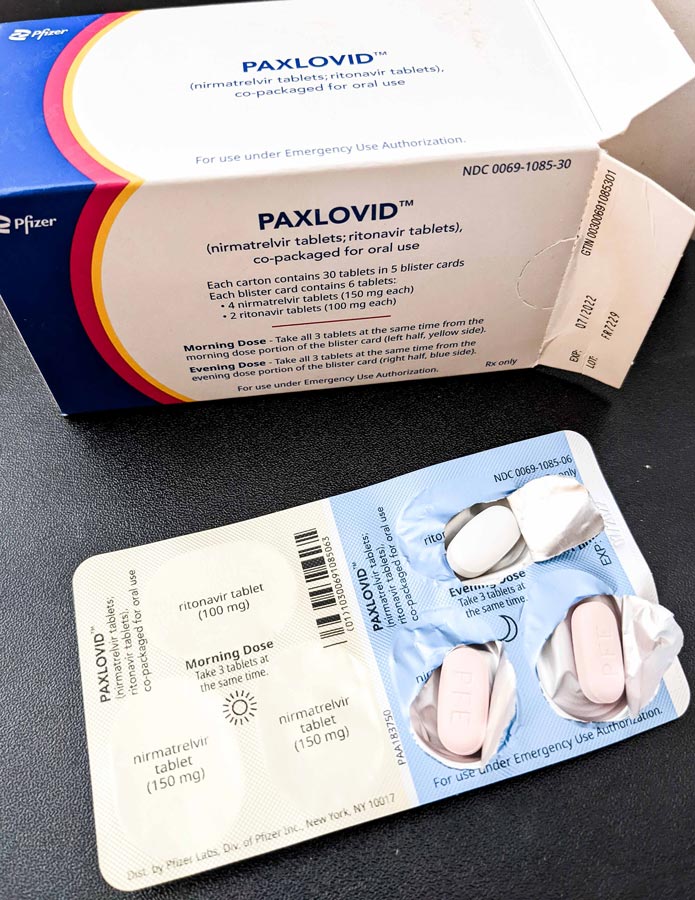 My personal experience of COVID-19 has so far been unremarkable. After my doctor checked for possible drug interactions – I had to back off on a statin and a blood pressure medication because their blood levels would also have been increased by Ritonavir – I was able to start a course of Paxlovid within two days of developing symptoms. By then I was coughing a lot and not feeling great, but that improved dramatically after a further 48 hours. The drug was clearly working. By the time I’d completed the course, the T line on the RAT test (which detects the viral nucleoprotein) had gone to faintly positive. Could this just be dead virus hanging around in the sinuses? I was soon disabused of that happy idea when, five days after stopping the Paxlovid, I was sneezing again, and the T line was bright red. Paxlovid doesn’t kill SARS-CoV-2: it just inhibits replication. Relapses from 5-30 days are not uncommon.

Typically, that second clinical phase was brief and, within a further five days, I was testing negative. From an immunology perspective, did the Paxlovid provide a respite from whatever SARS-CoV-2 might be doing to inhibit effective immunity, with the relapse to virus-production phase boosting my B cells and T cells to clear any remaining foci of infection?  Now I’m in the ‘hybrid immunity ‘camp, we’ll discuss that next week.

We believe in the free flow of information

This Setting it Straight article is licensed and available for republishing under a Creative Commons Attribution-NoDerivatives 4.0 International License.

You are free to republish this article both online and in print. We ask that you follow some simple guidelines.

Please do not edit the piece, ensure that you attribute the author, their institute, and mention that the article was originally published on The Conversation.

By copying the HTML below, you will be adhering to all our guidelines.

Copy this HTML into your CMS