A summary of Victoria’s 2017 influenza season

Victoria experiences an influenza season each year. Most activity usually occurs between June and September, but the commencement, duration and size of each season varies from year to year. Since 1998 the Victorian Infectious Disease Reference Laboratory (VIDRL) at the Peter Doherty Institute, supported by the Victorian Government Department of Health and Human Services (DHHS), has conducted surveillance for influenza-like illness (ILI) and laboratory confirmed influenza through the Victorian Sentinel Practice Influenza Network (VicSPIN). General practitioners (GPs) report the numbers of total and ILI patients seen each week, and age, sex and vaccination status of ILI patients. GPs collect nose and throat swabs from ILI patients, which are tested by real-time multiplex PCR for influenza A and B and other respiratory viruses at VIDRL. Laboratory confirmed influenza is a notifiable disease in Victoria, for which the DHHS collect data. The National Home Doctor Service (NHDS) operates an out of hours GP service and provides de-identified data to VicSPIN on ILI cases in Victoria. Influenza isolates from VicSPIN are forwarded to the World Health Organization (WHO) Collaborating Centre for Reference and Research on Influenza for antigenic characterisation. 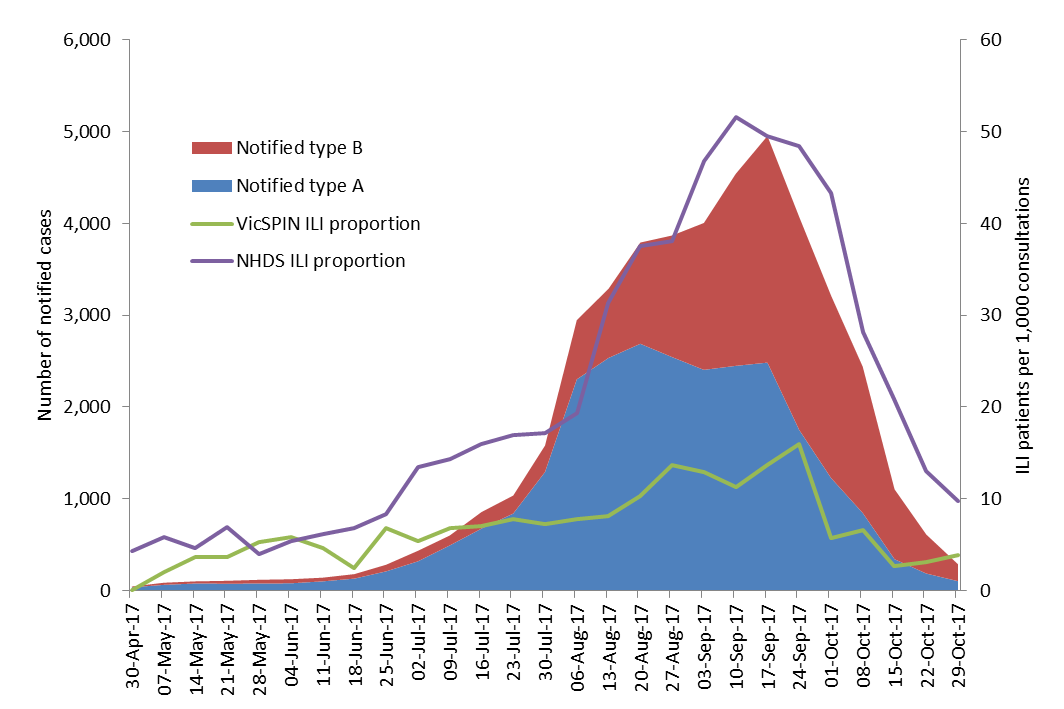 A record number of laboratory confirmed influenza cases (n=47,133) had been notified to DHHS as at 17 December 2017. Higher than average numbers of cases were notified from the start of the year. Influenza type A (identified by VicSPIN as mostly the H3N2 subtype) was predominant at the start of the season, with an increase in influenza type B towards the end of the season. Overall, 60% and 40% of notified influenza cases were type A (median age 41 years) and type B (median age 37 years) respectively.