Tapping into the power of unusual white blood cells 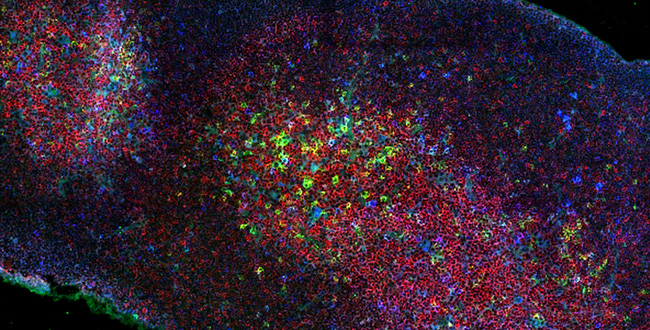 T cells, including innate-like T cell subsets such as Natural Killer T cells and MAIT cells, develop in the thymus from immature precursor cells. Here, the developing T cells (red) and NKT cells (green) can be seen within the thymus. Picture: Darryl Johnson.

Dr Daniel Pellicci’s research is probing unconventional types of infection-fighting T cells that combine speed and effectiveness, in a bid to find new ways to combat diseases like tuberculosis. This article was first published in Pursuit.

Dr Daniel Pellicci’s research is probing unconventional types of infection-fighting T cells that combine speed and effectiveness, in a bid to find new ways to combat diseases like tuberculosis

My work concentrates on the immune system. It’s primarily focused on a subset of white blood T cells, which have been conserved through evolution for millions of years to keep us fit and healthy.

I’m trying to understand what role these T cells play in the immune system and how they keep us free from disease. Basic science and curiosity-driven research provide the unexpected breakthroughs that contribute to the big leaps forward.

As the ‘first responders’, their job is to kick start the immune response and recruit other aspects of the immune system to mount a comprehensive fight against the invading infections, whether it’s bacteria or yeast. We have found that some white blood T cells represent a very large proportion of the human immune system – they are very frequent in human blood and probably in human tissue as well. Some of these cells can identify certain infections quite specifically.

The two types of these T cells that we are investigating are MAIT cells and CD1 restricted T cells. Both of these recognise different parts of a bacterial pathogen. They are unique because they can potently respond in minutes to hours after encountering an infection. We call them ‘unconventional T cells’.

There are two parts of the immune system, the adaptive part which generally can take days to swing into action, and the innate part, which acts quickly.

Unconventional T cells have all the features of adaptive immune cells but act very quickly and, as a result, are thought to bridge the gap between innate and adaptive immunity. With a better understanding of these T cells, we could potentially exploit them to treat human disease. In fact, some of them are already being trialled as immunotherapeutic targets to fight some types of cancer and infections.

We have recently developed some great new techniques to study these cells and we’re now poised to explore how they can be used to combat Mycobacterium Tuberculosis (TB), which continues to kill over a million people a year.

I’d like to find a way to exploit unconventional T cells to potentially boost the current Bacille Calmette-Guerin (BCG) vaccine, a vaccine effective in young children, but less effective in older people. As TB becomes increasingly resistant to some antibiotics, a vaccine that boosts the immune system may help protect against the disease and importantly, save lives.

Researchers at the Murdoch Children’s Research Institute are also looking at whether BCG vaccine can decrease allergy and infection susceptibility. This work is being carried by Professor Nigel Curtis and his team as part of the Melbourne Infant Study: BCG for Allergy and Infection Reduction (MIS-BAIR). Wouldn’t it be amazing if there was a link between unconventional T cells and the prevention of allergies and certain types of infections?

I joined the Department of Microbiology and Immunology in 2003 as a research assistant, before undertaking my PhD in 2009 under Professor Dale Godfrey and Professor James McCluskey. My PhD focus was Natural Killer T cells, a population of white blood T cells known to be important for fighting cancer, autoimmune diseases and allergies, and that work has shaped my ongoing research. In 2013, I was able to successfully obtain an NHMRC Early Career Fellowship, a CR Roper Fellowship and more recently, an NHMRC Career Development Fellowship.

The beauty of science is that it constantly evolves and adapts, so even though I didn’t become a biochemist like I originally planned, it turns out about a third of what I do is biochemistry. I think the reason I switched to immunology is that it’s specific and relevant to people. It’s relatable.

Dr Daniel Pellicci was recently awarded the 2018 Commonwealth Health Minister’s Medal and the NHMRC Research Excellence Award for his research into T cells.