Noroviruses are considered the leading cause of acute gastroenteritis, both sporadic and outbreak, in all age groups [1,2].  Noroviruses are classified into 6 established genogroups (GI – GVI), of which GI, GII, and GIV can infect humans [2].  Each norovirus genogroup can be further divided into genotypes, with the GII.4 genotype causing approximately 70-80% of all norovirus-associated gastroenteritis worldwide since the mid-1990s [3].  GII.4 noroviruses are particularly successful as they have been seen to evolve over time, through both antigenic drift and recombination, allowing the emergence of new variants that can evade a population’s herd immunity [3,4,5].

Faecal specimens from gastroenteritis outbreaks notified to the Victorian Department of Health and Human Services (DHHS) are sent to VIDRL for norovirus testing using real-time reverse transcription PCR (qRT-PCR).  The first positive specimen from every norovirus positive outbreak then undergoes genotyping for epidemiological purposes.  Where possible, genotyping is performed in both the open reading frame (ORF) 1 region (polymerase) and the ORF2 region (capsid) to ensure recombinant viruses are identified. 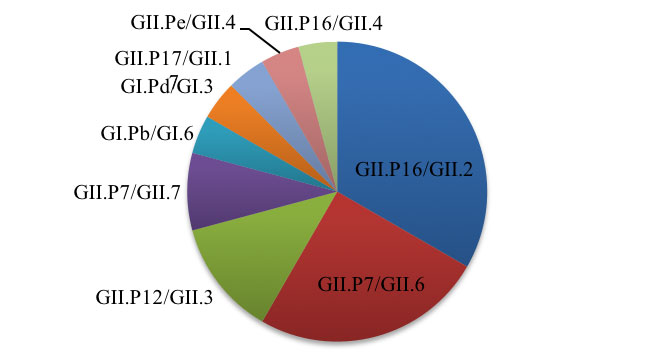 The predominant strain in Victoria in 2018 (GII.P16/GII.2) has been associated with large increases of norovirus incidence in a number of countries around the world, including China in 2017 [7], France in the winter of 2016/17 [8], Germany in late 2016 [9], Italy in 2017 [10], and Japan in 2016/17 [11].  As surveillance data shows that this strain is now circulating at relatively high levels in Victoria, it could potentially be a primary contributor to the seasonal peak in norovirus incidence expected in the latter half of 2018.