How sequencing techniques have enhanced our understanding of outbreaks in Victoria.

Measles is a highly contagious disease with significant complications including encephalitis and pneumonia, but the measles-containing vaccine offers highly effective protection. In 2014 the World Health Organization (WHO) declared Australia one of the first countries in the Western Pacific Region to have eliminated endemic measles virus transmission [1]. However, measles cases still occur in Australia due to sporadic importations by travellers from countries where the disease remains prevalent. High national vaccine coverage is essential for maintaining Australia’s elimination status. State Health Department disease control units work closely with diagnostic and public health laboratories to ensure rapid case confirmation, in order to prevent further spread and re-establishment of endemic measles. Rapid communication with interstate and international authorities is often required, since cases are infectious prior to developing symptoms; most cases have travelled either locally or internationally during their infectious period in the days before the illness manifests and is diagnosed.

In Victoria, the National Measles Reference Laboratory at the Victorian Infectious Diseases Reference Laboratory (VIDRL) confirms measles diagnoses by PCR testing and/or serology, confirms immunity of exposed contacts, and determines genotype by sequencing detected strains [2].  Rapid genotyping and sequencing data are used by the Department of Health and Human Services (DHHS) to distinguish between cases which represent onward transmission of a single strain (an outbreak), or co-circulation of multiple strains from different sources (i.e. single sporadic cases or small clusters of disease).

In September-October 2017, Victoria observed a significant increase in measles cases across the Melbourne metropolitan area, with fourteen confirmed cases notified to the Communicable Diseases Section at the Victorian Government DHHS over a six-week period (Figure 1). Measles genotyping and sequencing was critical in identifying three distinct, yet concurrent clusters of infection (Figure 2). 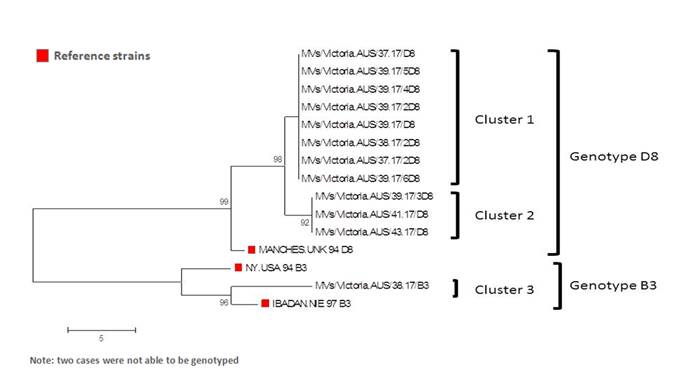 The two initial cases from Cluster 1 (n=8) were notified to DHHS on the same day. The cases lived in neighbouring suburbs but had no known links to one another. Neither case had been immunised. One case had not travelled, however the other had recently travelled to Indonesia, a country with high measles-endemicity. VIDRL identified both cases as genotype D8, with an identical match for the nucleotides sequenced (Figure 2). This strain lineage was known to be circulating in South East Asia at the time. The index case for this cluster of two cases and the country of importation of infection remain unknown, however it is likely both cases were exposed to the same index case given the common genotypes and identical sequence match.  A further six cases, including a NSW resident who had travelled to Victoria, were linked to the two initial cases. Multiple transmissions centred around a large CBD workplace, for which DHHS subsequently provided over 500 doses of MMR vaccine for employees who had no demonstrable immunity.

The first case in Cluster 2 (n=3) ate lunch near the workplace involved in Cluster 1, but had also travelled to Asia during their acquisition period. Two further cases were identified in Cluster 2, with one arising from exposure during an international flight. The third case whose virus sequence matched the cluster strain had recently travelled to Japan, where measles is uncommon. No definitive epidemiological link was able to be made with the other two cases in this cluster. Sequencing results showed that the Cluster 2 measles virus was also genotype D8, but was genetically distinct from the strain identified in cluster 1 (Figure 2), and matched a strain circulating in Singapore.

Cluster 3 (n=1) included a single measles case, genotype B3, whose infection was acquired in Romania.

Close contacts for each case were identified by DHHS public health officers, with either vaccination records checked and/or serology performed to ascertain immune status. Post-exposure prophylaxis - either MMR vaccine or Normal Human Immunoglobulin - was provided where appropriate. Passengers on three international and one domestic flight were informed of their possible measles exposure, and were provided with information outlining possible symptoms and what to do if they developed symptoms. People attending GP waiting rooms or hospital emergency departments at the same time as the confirmed cases were also followed up. A total of six Chief Health Officer alerts were issued [3] with extensive media coverage, as thousands of additional persons had potentially been exposed when cases visited shopping centres, travelled on trams and trains, and attended AFL finals at the MCG.

The outbreak was declared over in early December 2017. This experience of a period of intense measles activity, with multiple importations and multiple outbreaks demonstrates how co-operation between local laboratory, acute healthcare, and public health personnel, as well as interstate and international authorities, is essential for measles control.

The authors wish to acknowledge the efforts of the multiple DHHS Public Health Officers and VIDRL staff who worked to contain this outbreak.