When Dr Fielding seconded to the WHO Regional Office for Europe as a Technical Officer in the WHO Health Emergencies Program, his remit was to focus on influenza surveillance. When the COVID-19 pandemic emerged, however, he took on a role of lead COVID-19 surveillance for the WHO European Region. Freshly back in Melbourne, Dr Fielding shares his insights from the experience. 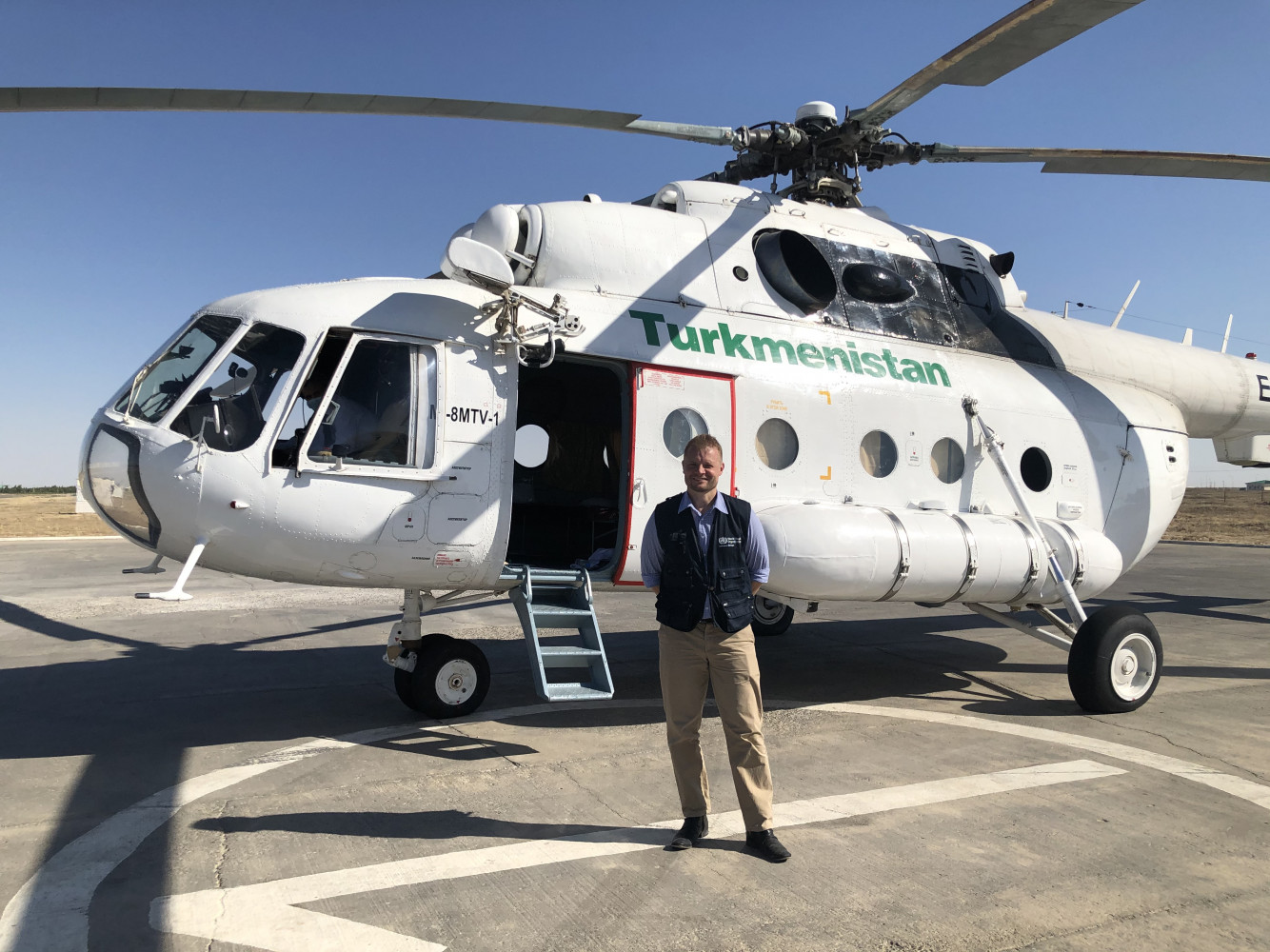 Dr Fielding in front of our helicopter transport to the Turkmenistan border crossing with Afghanistan.

Whilst initially a little nervous at the scope of my brief, I was also very excited to be working in a region with history and diverse cultures I’ve had a long interest and fascination in. The role was also the perfect opportunity to pursue my passion of developing infectious diseases epidemiology expertise and capacity in resource-limited settings.

As I arrived in the northern hemisphere summer, I was able to launch into the development work very quickly, with missions to Uzbekistan, Serbia, and Ukraine to review their influenza sentinel surveillance systems - a critical preparedness mechanism for an influenza pandemic, as well as assessment of the onset, magnitude, duration and severity of seasonal influenza. This work is supported by the Pandemic Influenza Preparedness (PIP) Framework, a collaboration between WHO, Member States, industry, and other stakeholders. In exchange for a financial contribution, industry partners can use influenza viruses submitted by Member States’ surveillance programs to the WHO Global Influenza Surveillance and Response System (GISRS) to manufacture vaccines, diagnostics, and pharmaceuticals. In turn, the funds provided are allocated for pandemic preparedness capacity building in priority countries and response activities during the time of an influenza pandemic.

There are six PIP Framework Member States in the WHO European Region: Armenia, Kyrgyzstan, Tajikistan, Turkmenistan, Ukraine and Uzbekistan. As well as the in-country missions to Ukraine and Uzbekistan, I also oversaw consultants conducting the same activities in the other Member States. With my WHO colleagues, I assisted in the delivery of a successful annual meeting in Armenia and conducted a training workshop on calculating pandemic influenza severity assessment indicators for Russian-speaking Member States in Georgia.

Perhaps the most memorable and daunting mission of my time in Europe was taking part in the Geneva International Discussions. Co-chaired by the Organization for Security and Co-operation in Europe, the European Union and the United Nations, this group is a negotiating format that brings together representatives from Georgia, Abkhazia, South Ossetia, Russian Federation and the United States and discusses security matters and humanitarian issues following the August 2008 war between the Russian Federation and Georgia. In January 2019, crossing restrictions were imposed at the Abkhaz administrative boundary line following reports of increased influenza activity in Georgia. That’s how I became involved and, with a colleague from the European Centre for Disease Prevention and Control (ECDC) in Sweden, gave an information session to the representatives and co-chairs on the topic “Public health: best practices for managing communicable diseases”. Supported by regional surveillance data, the presentation described the key epidemiological features of how influenza pandemic strains arise before becoming seasonal strains, what seasonal influenza activity usually looks like, and recommended control measures for seasonal influenza.

Regular reporting for the Northern Hemisphere influenza season started in October and the focus of the work then shifted to overseeing regional analysis of the influenza surveillance data from various system reported by member states, assembling the weekly Flu News Europe Bulletin with partners from the ECDC, and other analyses such as a surveillance report for the bi-annual influenza vaccine composition meeting at WHO Headquarters in Geneva to select strains for the following year’s influenza vaccine.

Press conference at the conclusion of the WHO-ECDC mission to Italy.

Everything changed in early January, however, when COVID-19 emerged and imported cases began appearing in Europe. An Incident Management Support Team was quickly established in the WHO European Regional Office and I was appointed to the role of surveillance lead for COVID-19 for the Region. Working with colleagues in WHO Headquarters, WHO Country Offices, ECDC and Ministries of Health, much of my role was in the development of COVID-19 surveillance strategies, protocols, and reporting.

In late February, the number of cases in Italy increased suddenly and quickly. With 24 hours’ notice, I was deployed to Rome as a part of a joint WHO-ECDC team to better understand the situation and evolution of the outbreak in Italy and support the immediate national response. Whilst the data showed a rapidly escalating situation, during my time there the gravity of the situation and implications for Europe more broadly became ominously evident, and there was a lot of media interest in our mission. More and more flights to and from Italy were being cancelled and the usually bustling streets and restaurants of Rome were steadily emptying of people. Towards the end of the mission, I took an eerie evening walk and vespa ride past some of the great buildings and monuments of Rome with barely another soul to be seen.

Outbreak responses are always high-intensity situations and a challenge for the mission team was to provide the best value to our Italian counterparts without impeding their critical response work. Working with local epidemiologists and another surveillance epidemiologist from ECDC, we developed a surveillance and laboratory testing and prioritisation strategies, tailored to epidemic phases, providing practical guidance for the response. One of the early challenges in the Italian response was coordinating a national response, as much of the legislative authority for infectious disease surveillance, response and control sits with regional governments. This distribution of authority is very similar to Australia’s national and state governments, and I was struck by the similarity of challenges this creates for surveillance in both countries (although Italy has 27 regions coordinate rather than Australia’s eight states and territories)!

I was part of another really interesting mission to Turkmenistan in early July. There was a lot of interest in the mission, because at that point (and as of November 2019) Turkmenistan was the only Member State in the WHO European Region that hadn't reported any COVID-19 cases. The 10-day mission included the three cities of Turkmenabat, Ashgabat and Turkmenbashy, with a busy schedule of visits and meetings with representatives from the Ministry of Health and Medical Industry, state, regional and local departments of Sanitary Epidemiological Service, hospitals, laboratories, customs and quarantine facilities, the Afghanistan and Turkmenistan border crossing checkpoints, and other United Nations agencies in Turkmenistan. As part of a suite of measures, the mission team recommended that Turkmenistan further activate the critical public health measures that are cornerstones to the response to COVID-19: scale up surveillance and testing for all suspected cases, tracing their contacts, and isolating and caring for the sick.

After seeing the COVID-19 pandemic in a number of different countries, I’ve been really fascinated by the similarities and differences between countries and individuals. Whilst there is a generally common goal to mitigate the health impacts of COVID-19, approaches have been varied and each country has its own demographic, socio-economic, cultural, and political factors that require tailored approaches. Inequities in access to and quality of healthcare and laboratory testing capacity across the globe is a perennial issue and highlights the importance of initiatives such as the PIP Framework. At an individual level, I’ve seen that everyone has a different perception and tolerance of risk, and it’s not defined by nationality, ethnicity, age, sex, education, or wealth. We all need to recognise, accept, and try to understand these differences in each other to be a better society on the other side of this pandemic.