A cure to HIV remains elusive. HIV-infected cells survive in the body by avoiding the usual ways the immune system would clear them. By silencing all virus activity, including virus replication and the creation of new proteins, infected cells avoid virus-induced lysis and immune detection.

Here is where the approach called ‘shock and kill’ comes into HIV cure research.

To induce HIV protein expression and virus-induced lysis of the infected cell, something needs to reactivate or ‘shock’ latent HIV from its’ latent state. A group of drugs called ‘latency reversal agents’ (LRAs) can stimulate transcription and virus production. Alone, these drugs are not able to induce a durable decline in the HIV reservoir.

The LRAs deliver the ‘shock’ part to this two-pronged approach but are missing the ‘kill’. Hence, the need for a combined approach.

Pro-apoptotic drugs can induce cell death – the second component of the ‘shock and kill’ approach. Apoptosis is the process of programmed cell death. Cells have a natural cycle of creation, development, and death. Apoptosis is the body’s way of clearing less-desirable cells. This allows them to quietly die without inducing mass inflammation and death of bystander cells. It relies on the triggering of pro-death signals within the cell. It is a balancing act, with each cell holding a balance between pro-survival proteins and pro-apoptotic proteins. Cells can tip the balance towards survival by inhibiting or cleaving pro-apoptotic proteins. They can also tip the balance towards cell death by promoting the expression of pro-death proteins.

HIV latently infected cells have an unnaturally high level of some pro-survival proteins. This contributes to their survival and persistence. Pro-apoptotic drugs can overcome this ‘pro-survival’ state. Thus, pro-apoptotic drugs have a compelling justification for their use in HIV ‘shock and kill’ cure approaches. They can trigger the death of HIV-infected cells using the cell’s own maintenance programming against itself.

Within the cell, there are several roadblocks that obstruct apoptosis. Anti-apoptotic proteins, such as BCL-2, constitute just one of these roadblocks. Another roadblock comes in the form of inhibitors of apoptosis proteins (IAP). IAPs target caspase proteins, which are critical players in the execution of the kill order.

There are various classes of pro-apoptotic compounds: IAP inhibitors, BCL-2 inhibitors, and PI3K/Akt inhibitors, to name a few. Several pro-apoptotic drugs are used in cancer treatment. Venetoclax, a BCL-2 inhibitor, is licensed for untreated acute and chronic lymphocytic leukemia, small lymphocytic lymphoma, and as part of a combination therapy for acute myeloid leukemia.  Edelfosine, a PI3K/Akt inhibitor, is licensed as an investigational leukemia treatment. The FDA have approved several other pro-apoptotic compounds, with positive results in various cancer, inflammatory (psoriasis) and chronic infection settings (HIV, Hepatitis B). 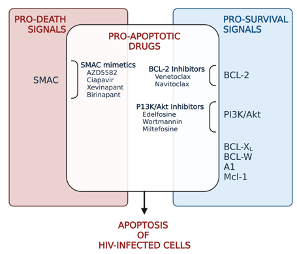 Classes of drugs that can trigger apoptosis (created in Biorender.com)

As mentioned above, researchers are looking at several different pro-apoptotic drugs for their ability to kill HIV-infected cells. Notably, venetoclax has promising results. Venetoclax is a BCL-2 inhibitor. It works by binding to and blocking the protein BCL-2 and disarming its pro-survival signals. Compared to uninfected cells, HIV-infected cells express high levels of the BCL-2 protein. This gives the latently infected cell a survival advantage. This may explain why previous clinical trials using only a single LRA treatment did not affect the size of the HIV reservoir.

A feature of active HIV infection is the production the HIV viral proteins, some of which have pro-apoptotic effects. One of the pro-apoptotic HIV proteins is protease, an enzyme that processes the proteins needed to form infectious virions. Protease can breakdown the protein procaspase8 into its pro-death form Casp8p41. The Casp8p41 fragment can then activate the pro-apoptotic protein BAK, to trigger apoptosis.

One strategy for ‘shock and kill’ is to treat with the pro-apoptotic or ‘kill’ agent first. This blocks the survival proteins (such as BCL-2), with the following ‘shock’-ing LRA to trigger the production of pro-apoptotic HIV viral proteins, ultimately leading to death of these cells. Treatment with the pro-apoptotic agent, venetoclax, before latency reversal successfully primed cells to die in lab model of latency. Venetoclax appears to tip the scales away from pro-survival. This overcomes the increased blocks to apoptosis in latently HIV-infected cells to eventually induce death.

Recently, a newer class of drug compounds have been investigated for their potential as an LRA and pro-apoptotic compound. SMAC mimetics (second mitochondria-derived activator of caspase/DIABLO) work by mimicking SMAC proteins. These SMAC proteins have a role in binding to (and blocking) the inhibitors of apoptosis proteins (IAP). SMAC and SMAC mimetics are therefore pro-apoptotic and stimulate cell death.

Xevinapant and Birinapant are two SMAC mimetics that have been examined in CD4+ T cells and macrophages. In these cells, the drugs caused degradation of the IAPs and led to cell death. Work is now underway to see whether SMAC mimetics and other pro-apoptotic compounds can deliver pro-apoptotic signals to latently infected cells in animal models.

To date, 8 different SMAC mimetics have proceeded to Phase I human clinical trials to assess their safety profiles. All SMAC mimetics have shown positive responses in participants, with limited off-target effects. Interestingly, as well as inducing apoptosis, AZD5582, ciapavir and xevinapant also act as LRAs to ‘shock’ and reactivate latent HIV. AZD5582 and ciapavir are now being tested as LRAs in a humanized mouse model of HIV. AZD5582 is also being investigated in a monkey model of HIV. These compounds may act as both the ‘shock’ and ‘kill’ components in the ‘shock and kill’ HIV cure approach.

One of the benefits of these compounds is that they can likely be administered as oral tablets. This offers a feasible HIV cure approach that could easily be distributed globally.

Pro-apoptotic drugs, therefore, pose a strong candidate for HIV cure strategies. Together with LRA’s in a ‘shock and kill’ approach, this combination strategy could bring us a step closer to an HIV cure.