High burden of avian influenza in the Northern Hemisphere, and what it means for us here in Australia

Written by Dr Michelle Wille, Honorary Researcher, WHO Collaborating Centre for Reference and Research on Influenza and the University of Melbourne, at the Doherty Institute and DECRA Fellow at Sydney Institute for Infectious Diseases, School of Life and Environmental Sciences and School of Medical Sciences, The University of Sydney.

Since October 2021 there have been 1050 outbreaks of avian influenza A viruses reported in Africa, North America, Asia and Europe alone. These outbreaks affect poultry, wild birds and have consequences for humans.

Following detection on poultry farms, millions of birds are culled which costs the sector millions if not billions of dollars. Furthermore, these outbreaks have had a devastating impact on wild birds; approximately 10 per cent of Svalbard breeding Barnacle Geese (Branta leucopsis) were found dead in the United Kingdom in January and around 8000 Eurasian (Common) Cranes (Grus grus) were found dead in Israel in December.

Whilst avian influenza viruses do not normally infect humans, a number of zoonotic human cases have now been identified in China, Russia, and most recently in the UK, ranging from asymptomatic to severe disease. 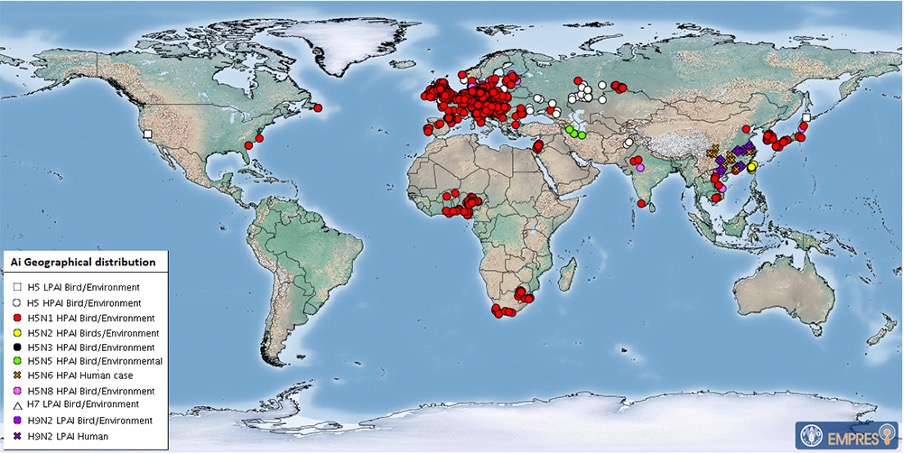 In response to the unprecedented scale of these outbreaks, the National Avian Influenza Wild Bird (NAIWB) Steering Committee have released a technical issue update on the situation and risk to Australian poultry, wild birds and humans.

Since 1976, there have been eight outbreaks due to HPAI in Australian poultry. The most recent outbreak occurred in 2020 in Victoria, resulting in approximately 500,000 poultry being culled.

Despite the intensity of ongoing outbreaks overseas, the risk to Australia remains low.

However, increased awareness and vigilance by poultry producers and wildlife health professionals is advised as we know know that that wild birds import both Asian and north American lineage viruses to Australia, abet infrequently, and that our migratory birds are exposed to HPAI while in Asia.

While wild birds are able to move these viruses around the globe, wild bird migration patterns are highly consistent. Specifically, long distance migratory birds are currently (Australian summer) found at their non-breeding areas, of which Australia is a key site for birds using the East Asian-Australasian Flyway.

As autumn approaches, wild birds will fly north towards their breeding areas in Siberia and Alaska.

As such, there is currently low risk of importation of viruses from the Northern Hemisphere to Australia with southward migrating birds, however aberrations in bird migrations do happen.

That is why the NAIWB surveillance program partners continue to collect and screen samples from Australian wild birds for avian influenza A viruses.

I am a key partner to this program, and contribute to screening around 1000 samples from wild birds each year. In addition to long term surveillance, we have contributed to two large, multi-year studies.

First, using more than 10,000 samples collected over 10 years and in collaboration with Professor Marcel Klaassen (Deakin University), we have identified the key reservoir species for avian influenza viruses in Australian wild birds which include key ducks and migratory shorebird species, and other key features dictating virus ecology such as rainfall.

Second, in collaboration with government partners and the NAIWB surveillance partners, we have analysed all available genomics data to better appreciate patterns of virus introductions and circulating in Australia.