To celebrate Day of Immunology on 29 April 2020, we asked some of our scientists to summarise their research advances into the immune system. Each day this week we’ll be delving into a different area of this research. Today we explore the enigma of γδ T cells, which are associated with multiple cancers and infectious diseases.

T cells comprise a special forces unit that attack invading pathogens and are central to the immune response. Killer T cells destroy infected cells, and helper T cells coordinate the attack. These cells survey the body for infected and unhealthy cells using T cell receptors (TCRs) that recognise the presence of molecules that shouldn’t be there.

Two main classes of TCRs exist that are referred to as αβ and γδ based on their components. Most studies of T cells have focused on T cells with αβ TCRs, whereas the more “unconventional” T cells with γδ TCRs have remained more of an enigma.

In addition to responding to pathogens, these “unconventional” γδ T cells survey tissues to detect metabolic changes or stress-related molecules that may be made during cancer or infection. Marc Rigau and colleagues at the Doherty Institute investigated how these T cells respond to small molecules produced by microbes and tumour cells called “phosphoantigens”.

Not knowing exactly how the recognition process occurs has long-since impeded the study of these important immune cells. Rigau therefore sought to determine the other elements involved.

The research team screened the entire genome to find genes required for γδ T cells to be activated by phosphoantigens. In addition to butryophilin 3A1, the top candidate identified was a related cell surface molecule, butryophilin 2A1. It was the combination that was needed to activate T cells. 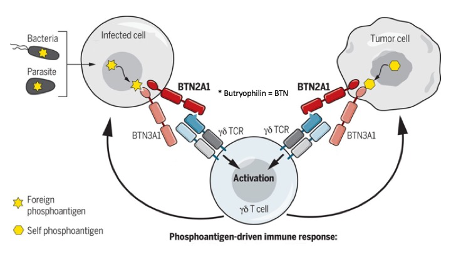 A graphical representation of genes required for γδ T cells to be activated by phosphoantigens. Credit: Marc Rigau

This recognition of phosphoantigens by “unconventional” γδ T cells is unlike how any other immune cell recognises molecules from pathogens, justifying the term “unconventional”. Given that phosphoantigens are associated with multiple cancers and infectious diseases, these T cells are an attractive target for the development of new immunotherapy treatments.

Armed with a better understanding the basis of how these T cells recognise stress-related molecules, the team can now work to optimally harness these cells in immunotherapy.

A paper on this research was published in Science.