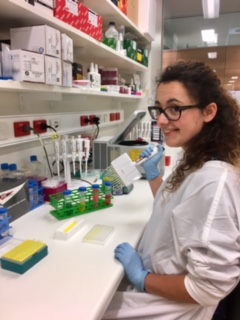 For Elise Gressier, leaving her native France to further her studies in the US and then land in Australia for a PhD was an obvious choice.

And she’s about to head to Germany for a year, as one of the first students enrolled in a joint program with the Universities of Melbourne and Bonn to get 30 doctoral students on track for global careers.

Launched in 2016, the Bonn & Melbourne Research and Graduate Training Group – Bo&MeRangG for short – is the brainchild of Doherty Institute Associate Professor Sammy Bedoui and Dr Marie Greyer. It began in 2016 with $5 million funding from the German Research Foundation (DFG) (equivalent to the ARC).

Sammy, who is Elise’s supervisor, says the program will leverage complementary strengths in immunological research.

“The Doherty Institute is really good at adaptive immunity – which is what we need in vaccines to provide long-term protection,” he says.

Most of the 30 doctoral students enrolled will be based at the Doherty Institute while they’re in Melbourne, undertaking their research under joint supervision and qualifying for a joint Bonn-Melbourne PhD.

“Global movement is expected of you as a scientist now. It’s probably a thing of the past that you’re born in Melbourne, do your degree in Melbourne, and work in Melbourne.

“Bo&MeRanG addresses the great increase in awareness and abilities that come with globalisation in the sciences.”

Sammy says his early training in Germany convinced him of the importance of travelling and international qualifications.

“Global movement is expected of you as a scientist now. It’s probably a thing of the past that you’re born in Melbourne, do your degree in Melbourne, and work in Melbourne.

“The Bo&MeRanG program addresses the great increase in awareness and abilities that come with globalisation in the sciences.”

“We thought this would boost what we can offer, in exposing PhD students to different environments, different languages, and of course, a joint qualification from the Universities of Bonn and Melbourne.”

For Elise, having one supervisor at each location is a welcome change from what she might have expected in her home country.

“Most of the time, students in France have only one supervisor. I think how it works here is great – I have these different points of view on the same project.”

She’s not fazed by her lack of German. As Sammy says, Bonn is a city that, in relinquishing its capital status to Berlin nearly 30 years ago, hung onto its mantle as a hub for global organisations like the WHO and the EU, where the lingua franca is English.

Which may well be a selling point to recruit some more home-grown talent. “The program has attracted a lot of European students, which we didn’t expect, so we’re hoping to convince more Australian students of the merits of going global much earlier in their careers.”