As the Royal Melbourne Hospital’s Victorian Infectious Diseases Reference Laboratory (VIDRL) at the Doherty Institute processed its 100,000th COVID-19 test this week, the Director and Head of the laboratory reflect on their learnings from the pandemic.

It’s been six long months since initial reports emerged of a ‘mysterious pneumonia’ outbreak in Wuhan, China, with more than 10 million cases diagnosed globally and over half a million deaths. It’s also been five months of long hours for the team, operating seven days a week.

“I’ve been involved in numerous outbreaks over the years, but never in my wildest dreams did I think that this one would become a global pandemic,” he says.

In early January, Dr Catton and the Head of the Virus Identification Laboratory, Dr Julian Druce, were monitoring with interest - but not concern – as news seemed to be of a limited point source outbreak of pneumonia that was spread from animals in a wet market. It soon became apparent that serious infections, person to person spread, and international transmission were all features of the new and the mysterious pneumonia, and that the cause was likely to be a coronavirus.

VIDRL had tests capable of detecting all human and animal coronaviruses and - once the gene sequence of the new virus was published - found that their tests could identify SARS-CoV-2, the virus that causes COVID-19. The team began to prepare in earnest.

By Australia Day the team had diagnosed Australia’s first case in Victoria, and within 24 hours confirmed three more cases in New South Wales.

“Everything changed in an instant,” says Dr Catton. “This is not a drill.”

Before that weekend was over, the team had successfully grown the virus from the first Australian case and had committed to sharing the isolate internationally, making news headlines around the world.

“The excitement of that day was incredible,” says Dr Catton, “In those early days, the work was rewarding. It was interesting, purposeful and manageable. But, as more and more cases were diagnosed across Australia, the workload and the pressure began to grow.

From left to right: Dr Catton and Dr Druce in the laboratory

Members of the team who had been involved in the 2009 influenza pandemic brought with them lessons they’d learned in that response, and many other large public outbreaks.

“We really hit the ground running,” says Dr Druce, “Our team was incredibly adaptive. We instantly began to stockpile reagents knowing that they would be a significant element of the puzzle for testing later on.”

Despite these lessons, the team could not anticipate the volume of swab tests that would pass through the laboratory, which would become four times greater than their previous maximum testing capacity on the peak day of the 2009 pandemic.

“We thought we’d be processing around 300 tests a day in the lab,” says Dr Druce.

“In reality, we’re often processing a thousand to two thousand tests daily. At our peak, we processed 3,400 tests in a single day.

“It’s like a freight train, where everything collides at once. It’s an exponential onslaught of demands,” he says.

The toll of COVID-19

The team has been working around the clock since 25 January, seven days a week.

“I keep thinking we’re in February,” says Dr Druce, “It feels like Groundhog Day. Each morning I roll out of bed, head to work, head home to bed, then head to work, and the cycle begins again.

“Even my dreams are about work. I’m always in the lab, even when I’m sleeping.”

“The work goes on seven days a week, and the pandemic never goes away. That never-ending demand is what makes it fatiguing. Last Saturday I had 33 calls. I counted them. It’s been pretty intense.” 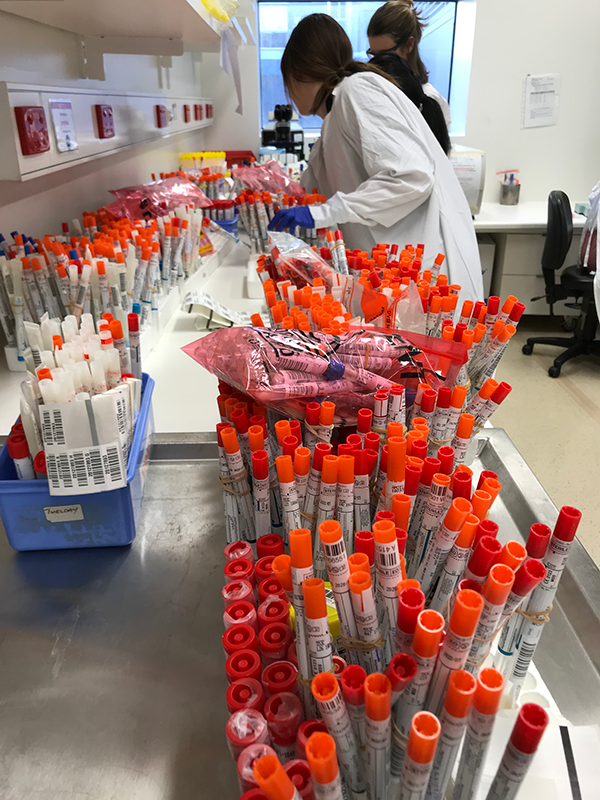 Overflow of COVID-19 samples for testing

Despite the significant workload and the weariness, spirits are high in the laboratory.

“People are always having a laugh. When it’s your turn to be super tired and cranky, others will lift you up. Even this morning, everyone was in such a happy mood despite the pressures,” says Dr Catton.

“I’d been aware that the 100,000 test milestone was coming up and had good intentions to organise something to celebrate it. Complete fail - we were so busy that we didn’t have time.”

“This morning I went into the lab and said to the team, ‘Did you know that we clicked over 100,000 tests this week?’ Everyone went “Woo-Hoo”. And that was it. We got back to testing.

“It’s a staggering number to hit in one outbreak,” he said. “And it’s not over. But we couldn’t have done it without the support we have had. Our staff in the virology lab have knocked it out of the park, but from right across VIDRL, staff have slotted in to the response; as have staff from across the Doherty Institute, especially the PhD students and Post-Docs.”

“Obviously, we’ve had strong support from the Victorian Government too. Without the reagent stockpile we were funded to build for example, we would not have a story of 100,000 test to tell today.”

Due to the unprecedented nature of the pandemic, scientists and public health laboratories have needed to swiftly adjust to respond to the extraordinary volume of testing that’s been required in Victoria.

In addition to the testing at VIDRL, further testing has been carried out at the University of Melbourne’s Microbiological Diagnostic Unit (MDU) Public Health Laboratory and the Royal Melbourne Hospital’s Department of Microbiology, both part of the Doherty Institute, and the latter the first hospital laboratory in the state to offer COVID-19 testing.

Professor Deborah Williamson is the Director of the Royal Melbourne Hospital’s Department of Microbiology and Deputy Director of MDU, and says she’s been impressed by the agility of laboratory staff to meet the demands of COVID-19.

“Laboratory staff in the Department of Microbiology at Royal Melbourne Hospital (RMH) have conducted over 20,000 tests for COVID-19 and are making an absolutely vital contribution to patient care and staff well-being during the pandemic,” says Professor Williamson.

“The professionalism, dedication and commitment shown by all staff at RMH really has been outstanding."

At MDU, another 25,000 COVID-19 tests have been completed – a number that even surprised the team, as the laboratory’s primary remit is to focus on genomics rather than viral diagnostics. Like so many, they’re working around the clock in the lab and in bioinformatics seven days a week to deliver and analyse sequences in as near real time as possible.

The University of Melbourne’s Courtney Lane, an epidemiologist at MDU says: “Our scientists, supported by the Department of Health and Human Services (DHHS), have performed genomic sequencing on the SARS-CoV-2 virus from over 1500 Victorians diagnosed with COVID-19.

“This information is then used by the DHHS to inform their public health interventions. With sequencing performed on over 2500 samples, we're also supporting other states, territories and countries in the region to access this revolutionary technology,” she says.

Unlike other outbreaks the team has been involved with, COVID-19 is no sprint. They’re constantly refining their processes, particularly during surges, for effectiveness in the long run.

“Each time you learn new things,” says Dr Catton, “I always say - never waste a good crisis. We’re learning from this and, in that sense, I really feel good about what we’ve achieved so far.”

“The Doherty Institute was conceived five years ago for this very purpose and, along the way, we’ve become a bit of a household name. The way that the whole institute has pivoted to COVID-19, and the collaborations and sense of common purpose it’s brought has been really great. We’ll be better and stronger from this experience than when we came in.

“Firemen live to fight fires, and it’s the same for us. Even though we’re tired there’s a feeling of commitment that we’re getting the job done,” he concludes.